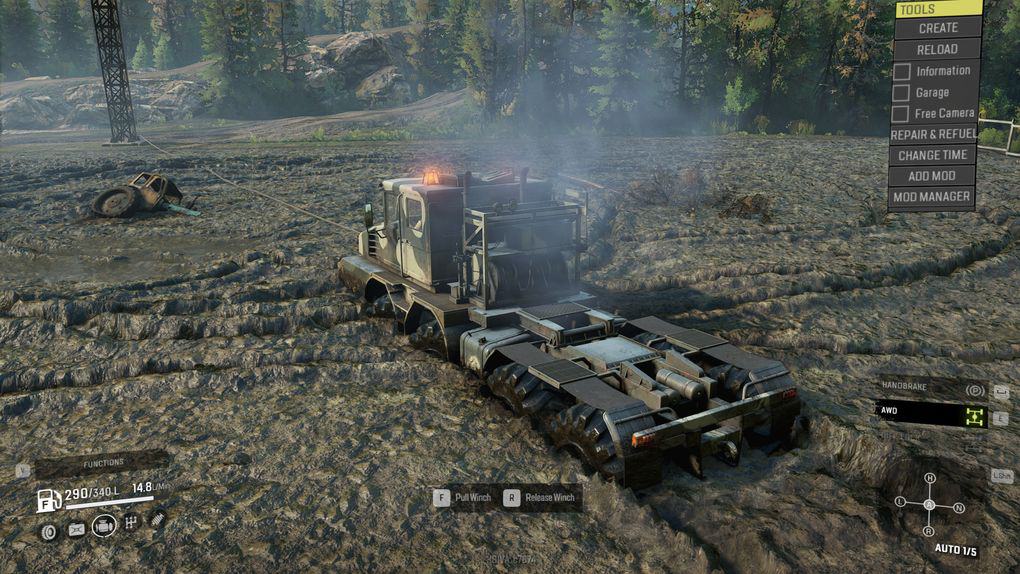 The work of an enthusiast to reproduce a more realistic experience through a lot of modifications within the game’s physics, as follows:

– Adjusted the grip between the tire and ground surfaces to real comparable levels.
– Increased the top speed of all vehicles and carefully corrected their acceleration in an attempt to match that of the vehicles when they are empty (when loaded though, the difference is barely noticeable and I can’t change that). Due to the actual physical model of the game I was constantly forced to make a decision between what goes for being more realistic as other stuff turn even worse, so I chose to have the more important aspects “simulated” for more realism at the expense of other aspects which I considered less important and let them become even more arcadish as a side effect, due to the very limited physics model of the game. An example is the mud which acts like a sticky glue. Even if you come at top speed, you’ll instantly stop into it. I could not find a way to modify this strange mud behavior. In order to have the vehicles be able to reach a more real top speed (where the conditions allow for it), I was forced to put a bit more torque than required on each truck’s engine. This does slightly overpower the vehicles in terms of acceleration, but with some tweaks I believe I’ve found a good balance for the least realism reduction.
– Better which lengths. A real which length for mud truckers can reach more than 150ft in length (>45m), but to not make it seem like a cheat, I’ve limited the default winch length to 30, the electric to 20 and only the more expensive one to 50m.

Installation:
1. Extract the archive’s content in a temporary place. I would extract it in the same folder named “client” (as at the path below), which already contains the “initial.pak” file that needs to be modified.
2. Open the “initial.pak” file with a program called “Winrar” (the file is found at “…SnowRunnerPublicTesten_uspreloadpaksclient”) and add the whole folder named “[media]” (that you have extracted earlier) which automatically overwrites the original files after pressing “OK”. You can also try copying and overwriting the “[media]” folder’s content into the “initial.pak” file using your own methods, but with “winrar” it proved safe.

This mod works with all vehicles and maps. It only modifies the global physics, so it should work with any vehicle that uses the game provided tires, gearboxes, engines, winches, etc. or maps.

Enjoy and share your opinions on supporting the realistic experience ideas. I’m all for a more realistic gameplay, as I don’t like arcade.